Why Care About the Inland Empire?

The Inland Empire consists of San Bernardino County and Riverside County. It is also referred to as the Riverside-San Bernardino-Ontario Metropolitan Statistical Area (MSA). There are 382 such MSAs in the United States. If you rank them by population, where Greater New York (New York-Newark-Jersey City) and Greater Los Angeles (Los Angeles-Long Beach-Anaheim) are at the top, then the Inland Empire ranks 13th, just two position below the San Francisco MSA (San Francisco-Oakland-Hayward). It has 150,000 fewer residents than the SF MSA, but is four positions ahead of San Diego. 4.5 million people live in the two counties of the Inland Empire, which makes it roughly a third of the size of Greater Los Angeles, and approximately 10% of the population of California. Bottom line: it is big (a lot of people live there). More residents live here than in Nevada, South Dakota, and Wyoming combined.

There are many aspects of the Inland Empire that make it of economic interest other than the population size. One fact that stands out is that roughly 40% of its labor force commutes daily into the Greater Los Angeles area, and to a lesser extent into San Diego.

“Traffic” is LA’s middle name and anyone who has had the pleasure to experience the “All Roads Lead into LA” phenomenon on a weekday commute, knows what a nightmare it is. We list some selective routes on the I-10, CA-91, CA-60, I-15 etc. at peak times using Google Maps. Note that if you could drive 60 mph from Upland to Downtown LA, you would be there in 38 minutes.

Since no one (at least as far as we know) enjoys commuting, then why do it? And what are the policy options to improve on the situation?

Will there be a National Recession in 2019 and Do We Care in the Inland Empire?

Come February 2018, the current expansion will be the second longest in post World War II history in the U.S. How long is the typical (average) expansion in the U.S.? Roughly 5 years. If  past averages are a forecast of things to come, then we should have seen an economic downturn by 2014. Did not happen. But what about the last 3 expansions before the Great Recession? They were extremely long, lasting, on average, roughly 8 years? As a matter of fact, we had gotten used to long expansions without interruption. We even coined a new term for this phenomenon: the Great Moderation (meaning long periods of expansions without much fluctuations). Well, if this expansion (which certainly, at times, felt like the “Not So Great Expansion”) was related to to the average length of these previous 3 episodes, then we should have expected the next downturn by 2017. Did not happen either.

But how much longer can it last? Note that even central bank chief Ben Bernanke said that the Fed was more worried about inflation than unemployment in May of 2008 – meaning while we were already 5 months into the Great Recession (the last recession was not dated as a downturn until December 2008). And let there be no doubt, when the U.S. sneezes, the Inland Empire shows strong signs of the cold due to the fact that it is a logistics center (yes, all those storage and distribution centers around Ontario Airport). An economic downturn in the U.S. means less imports, and therefore less containers being moved from the ports of Long Beach and Los Angeles, and less freight going through Ontario airport.

Is there any sign of an incoming downturn? Economists use forecasting tools to look into the near future. Two major methods are the “index of leading economic indicators” and “econometric forecasting models.” The Consumer Sentiment Index developed by Reuters and the University of Michigan, is one component of this index. Others include housing starts, the stock market, and unemployment claims. The rule of thumb is that if the index turns down for 3 consecutive months, then there will be a recession 6 months down the road. We will reveal our latest “index of leading economic indicators” reading for the Inland Empire and also the Consumer Sentiment Index for the Greater Los Angeles area and the Inland Empire at our forecast conference in March.

Employment and “First In Last Out”

The Inland Empire has the reputation as showing the first signs of going into a recession, and being the last to coming out of the downturn (first in, last out). This is similar to a lake freezing and thawing from the periphery. Why is that?

First, let’s establish some facts. Data on MSA employment and unemployment only goes back to 1990. Since then, we have had 3 recessions. One of them, around the turn of the century, was the dot-com recession, centered around a stock market crash based on high tech firms, most of which were located in the Bay area. The earlier recession, in our view, was part of the “peace dividend” which affected the Southern California aerospace industry in a particularly negative way. The last one was the result of a burst of the housing bubble. It is for the early ‘90s and the Great Recession that we expect to observe the freezing/thawing lake analogy to hold best.

For the early ‘90s, unemployment rates in the Inland Empire increase earlier than for California and the U.S., and reach a higher level; the reverse is true for the subsequent recovery. Note that housing prices in Los Angeles peaked in the summer of 2007, almost half a year before the Great Recession started. However, construction employment was at the highest level almost a year earlier in the summer of 2006, and if you remove regular seasonal components from the data (“seasonally adjusted”), then employment in that sector peaks as early as March 2006.

An important fact to realize is that unemployment is measured by residency, not occupation. Hence if someone loses their job in Los Angeles but lives in Upland, then the unemployment rate in Upland goes up, but the unemployment rate in Los Angeles is unaffected. Consider the following scenario: a Rancho Cucamonga resident works in Pasadena. She would prefer to have a job in the Rancho Cucamonga area, but finds that the ones in Pasadena are better paying. Hence she is willing to undertake the daily commute on the I-210. Her supervisor in Pasadena is more qualified and hence draws a higher salary: she can afford to live in Pasadena. As the economic downturn starts, the Rancho Cucamonga resident gets laid off first, and hence the unemployment rate in the Inland Empire increases. It is only after the recession becomes more severe that the Los Angeles County resident also loses her job. The reverse happens in the recovery: hence first in, last out. A consequence of the Rancho Cucamonga resident losing her job is that she does less shopping in the Inland Empire, and hence workers there also are being laid off. This group of workers is the very last to find employment in the recovery.

More on the latest developments in the labor markets for the Inland Empire and Southern California at our March conference.

Statewide minimum wages increased on January 1, 2018, to $11.00 (slightly less for smaller businesses). National minimum wages have not been raised since 2009, but California is one of a large number of states that has a state minimum wage that is higher than the national level, and hence its level rules. The minimum wage increases will continue over the next few years until they reach $15.00 on January 1, 2023 (an economic downturn could halt the annual increases). 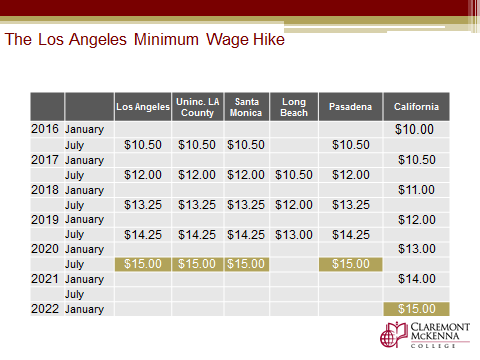 There is some debate whether or not small increases in the minimum wage lower employment, and especially teenage employment. We believe that increased minimum wages will be beneficial to those workers who can keep their jobs, while the income of those who will be displaced will be lower. However, evidence of shorter hours of work from previous minimum wage increases is not as clear cut as you would hope. There is, currently, some news that firms in low-wage industries will not be able to pass on the higher costs to consumers in terms of higher product prices, especially in the fast food and retail industries. Furthermore, the advantage of increasing minimum wages locally rather than state-wide, is that certain geographic areas can afford increased costs more easily than others. We are awaiting for the outcome.

The fact is that capital labor substitution in the retail/fact food industry has already happened, and will continue at an accelerated pace given the arrival of new technologies. The robot at the Aloft Hotel on the east side of the Dumbarton Bridge brought certain requested items to my room on the 4th floor without the help of a human is a sign of things to come.

The Lowe Institute of Political Economy at Claremont McKenna College has, in collaboration with Chapman University, prepared a set of three consumer sentiment indices for the greater Los Angeles metropolitan area. These indices are published at quarterly intervals.

What is an index of consumer sentiment?

A consumer sentiment index is a forward-looking indicator of economic strength that enables business-people and economists to better forecast and plan. Roughly 70% of all spending comes from households; thus understanding the mood and financial position of households is crucial to economic forecasting.

Why do we need an index of consumer sentiment for the Inland Empire?

Our consumer sentiment index is a forward-looking indicator of economic strength in our local region, unparalleled in its specificity. Many data used in economic forecasting are regional or national, affording little specific information of the local economic conditions. For instance, the spread between long and short-term interest rates is a good indicator of bank profits, but the whole country faces the same interest rates. By contrast, consumer sentiment can, by sampling households within the area of interest, be finely targeted to a specific region so that one is measuring the local economic climate directly. Thus, our measure of local consumer sentiment enables us to tailor our forecasts to local conditions. As far as we are aware, this is the first sentiment index for a metropolitan area.

How is the sentiment index calculated?

Every quarter, for each of the three regions, we ask a series of 7 questions of a sample of 500 individuals. The individuals have been randomly selected in proportions that ensure the samples as a whole are demographically representative of the regions in question along several dimensions including age, income, gender, and race. We contract with Kelton Global to ensure this sampling is done accurately to minimize sampling error. To aid comparability, our questions mimic those asked by well-known national indices of consumer sentiment. We ask consumers about how they see broad business conditions and their own personal finances evolving at present and over the next year. We then tally responses and compose an index which measures the degree of optimism among local households.